Saw Palmetto stops hair loss and triggers healthy hair growth. It inhibits dihydotestosterone (DHT), an enzyme that is associated with male pattern baldness. Saw palmetto extract is an extract of the fruit of Serenoa repens. It is rich in fatty acids and phytosterols. It has been used in traditional, eclectic, and alternative medicine to treat a variety of conditions, in particular benign prostatic hyperplasia (BPH). Reviews of clinical trials, including those conducted by the National Center for Complementary and Alternative Medicine, found the extract to be no more effective than placebo for BPH.

The recommendation of saw palmetto for hair loss came about when it was discovered that it may stop the testosterone in the body combining with an enzyme called type ll alpha reductase (note: whilst testosterone is seen as a ‘male’ hormone, we women have it in our bodies too).

When testosterone and type ll alpha reductase get together, they form something called dihydrotestosterone (DHT).

DHT is known to contribute to both male AND female pattern baldness because it binds to scalp follicle receptors, causing them to shrink. By blocking the formation of DHT, saw palmetto is believed to act in a similar way to the medication finasteride, which is commonly given to men as the drug Propecia in order to treat male baldness.

Few adverse effects or allergic reactions are associated with saw palmetto extract use. The most common are gastrointestinal, some of which may be reduced by taking the extract with food. Use may increase the risk of bleeding or affect sex hormones, and concurrent use of other drugs with similar action should be avoided.
Beta-sitosterol, a chemical present in saw palmetto extract, is chemically similar to cholesterol. High levels of sitosterol concentrations in blood have correlated with increased severity of heart disease in men who previously suffered heart attacks. 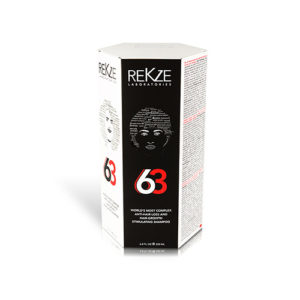 63 Saw Palmetto Shampoo formula contains some of the most effective anti-DHT Blocker ingredients such as Salvia sclarea extract, which plays an important role in hair loss treatments as it clears pores in the skin. It also has a stimulating effect on the hair follicles, which encourages growth while blocking harmful follicle chocking chemicals in the body like DHT, which naturally occur in both men and women.

Kigelia africana fruit extract, which is an anti-oxidant particularly effective in helping to prevent hormonal (DHT) damage to hair and recommended for dry scalps, and Serenoa serrulata extract, a compound that stops hair loss and triggers healthy hair growth, and inhibits dihydotestosterone (DHT).

This site uses Akismet to reduce spam. Learn how your comment data is processed.